Before 1922, there was a group of Christian believers at Asamankese, in the Eastern Region of Ghana, who eagerly sought for the “OLD TIME POWER” of Pentecost. Under the leadership of the late Rev. Peter Newman Anim they contacted an African-American Pastor A.Clarke, a non-pentecostal, healing and holiness preacher. They had started the “FAITH TABERNALCLE” Church in the Gold Coast – now Ghana -, and met regularly; fasting, praying and studying doctrines concerning the New Testament Chruch, the new birth, baptism of the Holy Spirit and the resultant gifts.
On the 15th of October, a revival service was held in the house of the late elder Kwabena Asare. Many souls were won. Rev. Anim, an Evangelist, had been baptized with the Holy Spirit whilst reading and studying “The Sword of the Spirit”, a publication of the Faith Tabernacle Church in Philadelhpia. Rev. Anim and Armah, also devotee of the Faith Tabernacle at Nsawam, decided to work together and officially adopted the name, “FAITH TABERNACLE”.
Nana Kwaku Amoah, a traditional chief of Asamankese, offered them a piece of land upon which they constructed their church building. Pastor A. Clarke issued Rev. Anim with a certificate of registration in October 1923, assigning him to the service of God and the right to baptize and appoint workers. About the same period Odubanjoh and other faith Tabernacle devotees in Nigeria were consecrated into the minitry of Pastor A. Clarke.
Rev. Anim’s movement held their first convention in 1923, which attracted several people. The Pentecoatal experience quickly spread to other parts of the country and many believers also began to experience the Holy Spirit baptism through constant prayers and fasting.

CHANGE OF NAME AND AKROSO REVIVAL

In 1930, Rev. Anim came into contact with The Apostolics resulting in a new name, “APOSTOLIC FAITH.” Some of the notable founding members included the following deceased ministers:

In 1931, Rev. James S. Gyimah and members at Akroso organized a week-long revival prayer meeting during which a prophetic message through Rev. Gyimah, revealed God’s divine covenant with the church. They continued to meet regularly, giving themselves to prayers, fasting and Bible studies, watching and waiting patiently for the fulfillment of the prophecy.

VISITORS FROM OTHER COUNTRIES TO THE GOLD COAST

In 1935, the newly born Pentecostal Movement which was having fellowship with the Nigerian Apostolic Faith, met one Pastor George Perfect, a missionary of the Apostolic Faith, United Kingdom, who had then come to Nigeria on a missionary trip. He was invited for a short two-weeks visit to the Gold Coast and stayed at Asamankese.
In 1936, a joint united meeting (with the Nigerian counterparts) was held at Asamankese. Prophet Evangelist Babaloba of Nigeria and Pastor Vivian, stayed with them for two weeks. The was followed up in the year by the visit of Pastor Wellington of the Apostolic Church U.K. He advised that they apply to the Apostolic Church, U.K. for a resident missionary.

On the 4th of March 1937, Rev. James Mckeown of the Bradford Apostolic Faith U.K. arrived in Accra Gold Coast. He was taken to Asamankese as the first missionary of the Apostolic Faith, Gold Coast. Upon his arrival the leaders adopted the name “THE APOSTOLIC CHURCH” of Gold Coast.

In June 1937, Rev. James Mckweon was seriously attacked by malaria and was kept in his room at Asamankese for some days without medication in accordance with the rules, belief and practice of the Apostolic Faith. Though he leaders continued to pray daily for his healing, his condition worsened. One Mr. Turkson of Asamankese informed the then District Commissionar at Kibi. The District Commissioner who was on a special visit to Asamankese area rushed to see Rev. Mckeown, took him in his own vehicle and sent him to the European Hospital – curently, Ridge Hospital – in Accra.
He spent about two weeks at the hospital where he fully recovered. On his return to Asamankese, the leaders confronted him he had violated the rules and principles of the church because he had sought for medication at the hopital.
In June 1938, a general meeting was held by all members from the country to dicuss this unpleasant situation but the leaders at Asamankese delibrately refused and condemned Rev. Mckeown for lack of faith in prayers for healing. This led to a big conflict and a fraction demanded that Rev. Mckeown leaves for home. The Asamankese local officers seperated themselves from the majority of members who rooted for Rev. Mckeown. They therfore adopted the name “CHRIST APOSTOLIC CHURCH” whilst members from Bobikuma, Amarko, Saltpond, Abura Dunkwa, Atonsu, Assin Enyiresi, Akim Manso and Banko on Ashanti, maintained the name “THE APOSTOLIC CHURCH”.
The late James Gyimah who had delegated the late J.A. Bimpong and Nyarko Kwabena to the said meeting had instructed that they were not to append their signature to any document when the need arose. He sent five people to Asamankes to convey Rev. James Mckweon and his belongings. They had to walk a distance of ten miles (16 km) and Rev. Mckeown had to be carried on their backs to cross rivers on the way. On the arrival at Akroso, he was sent to the guesthouse, where he stayed for three weeks.
The Akroso group in collaboration with the Winneba group, led by the late Mr. Sanneize, an uncle of the late Prophet J.C. Quaye, accomodated Rev. Mckweon at Winneba. Winneba, thus became the headquarters of the Gold Coast Apostolic Church.
In Aplril 1942, the headquarters was transferred to Cape Caost and between 1946 and 1947, the headquarters was transferred to Accra.
In 1953, a team headed by Dr. Thomas Wyatt, visited the Apostolic Chruch of the Gold Coast, at the inivitation of the Church Council. Dr. Wyatt, from Portland, Oregon, was a revivalist preacer who ws involved in a movement called “Latter Rain”. Other members of the team included Adam Mckeown, Fred Pole (an Apostolic pastor) and Stanley Hammond (an Apostolic missionary in the Gold Coast).
The Bradford Apostolics were worried and reluctant to allow the visit. Rev. James Mckeown also as not keen on the Wyatt’s visit, foreseeing it would cause trouble back home. They held meetings in Accra , Kumasi and Cape Coast.

THE AFTERMATH OF THE LATTER RAINS’ VISIT

Rev. James Mckeown was to append his signature to an amended constitution of the Bradford Apostolic to confirm his loyalaty. he refused together with Cecil Cousen. Both were dismissed. Back at hine in the Gold Coast, the church demanded that Rev. Mckeown returns to pastor them. Two church groups resulted: “THE APOSTOLIC CHURCH OF GOLD COAST” (Bradford loyalists) and “THE GOLD COAST APOSTOLIC CHURCH” (Mckeown loyalist).
In 1960, Rev. J.A.C. Anaman attempted to wrestle chairmanship from Rev. Mckeown, taking advantage of the political situation prevailing by then, whilst Rev. Mckeown was on furlough. Rev. J.A.C. Anaman finally left to join the Apostolic Church of Ghana (Ghana, replacing Gold Coast after the independence in 1957).
In 1962, as a result of the personal intervention of the late President Kwame Nkrumah, the long-standing dispute which had plagued the two church groups. was finally settled.
The Ghana Apostolic Church, headed by Rev. James Mckeown, was requested to change their name. From August 1st 1962, the Ghana Apostolic Church became known as “THE CHURCH OF PENTECOST”. 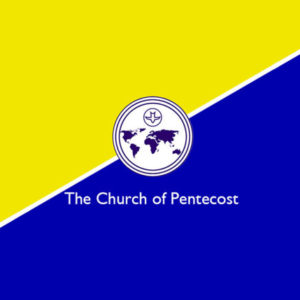